The Top 7 Most Rare French Stamps

In this article, we’ll review the current top 7 most rare and valuable collectible France stamps in the world.

Stamp collectors enjoy collecting hard-to-find stamps. Among some of the most sought after in the world are rare French stamps, which showcase the beauty, culture, history, a portrait of Ceres, or even significant political figures of the country of France. You’ll notice that quite a few of the stamps you’ll find among this list are the extremely rare and valuable Ceres stamps from the mid 19th century. Rare Ceres stamps in pristine condition from the mid 1800s can be really hard to come by.

The following is a list of the top 7 most rare French stamps (at the time of this post when it was published.)

The 1 Fr Light carmine on yellowish tete-beche from 1849, in very fine condition was sold for a whopping $190,000 by Robert A. Siegel on June 19th, 2010. This issue is widely regarded as among the greatest 1849-50 Ceres issues in existence. Ceres was the Roman goddess of growing plants, which symbolized the rise of the new republic. 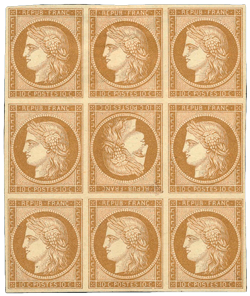 This issue consists of nine unused 10c Ceres stamps. These rare France stamps showcase the magnificent beauty of old and rare French stamps still in great condition from the mid-1850s. This rare French stamp issue was sold by Robert A. Siegel on June 19th, 2010 for $90,000.

A unique feature of this issue is that the center stamp is arranged so that it is upside down when compared with the eight others surrounding it.

One of the most sought after of rare French stamps, this France Ceres issue was designed by Jacques-Jean Barre. Another great French Ceres stamp that is extremely hard to come by. 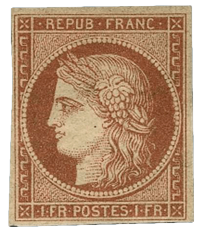 This set of six blue 25 centimes stamp was issued on July 1st, 1850. Like some of the other stamps in this list, this issue features the Roman Goddess Ceres. Many used tete-beche pairs have survived to date, however only two unused examples are known to survive today.

An extremely rare France stamp, you’d be lucky to find a blue 25 centimes stamp pair from 1850.

Some of the earliest rare France stamps in the country’s history feature the political figure Napoleon III. This rare stamp 10c was first issued in 1852, depicting Napoleon III. Today, you can almost never find this historic stamp in sound condition.

However, the 10c Napoleon III stamp was auctioned for a whopping $40,000 at Robert A Siegel Auction Galleries’ sale on November 13, 2013, in great condition. 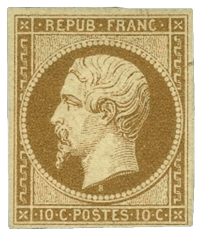 This is one of the rarest 20th century French stamps available. This stamp depicts the SS Pasteur, which was an ocean liner built for Compagnie de Navigation Sud-Atlantique. The SS Pasteur sailed for 41 years, and this deep blue-green stamp commemorates the legacy of this beautiful ocean liner.

This postage stamp was originally designed and engraved by Albert Decaris and was issued on July 17th, 1941. One of the most valuable French stamps of all time, the SS Pasteur stamp was last sold for $30,000.

This is one of the most unique rare French stamps because it was issued to not prepay for the delivery of mail. This stamp was issued during the time when the delivery amount wasn’t paid by the sender, but by the recipient.

This 10c postage stamp was thought to be the world’s first postage due stamp. It was auctioned by $23,100 at Cherrystone auction in May of 2006. 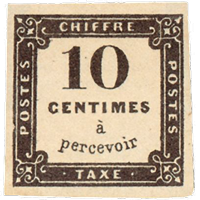 The postal history of France began on January 1st, 1849, during the Second Republic of France. The first stamps were designed by Jacques-Jean Barre and depicted the Roman goddess Ceres. In the year 1852, a new series of stamps were issued replacing Ceres with the portrait of Louis-Napoleon Bonaparte. Following the Second Republic, in 1853, the stamps issued during the Second Empire featured inscriptions saying “EMPIRE FRANC,” keeping the portrait of Napoleon III. Napoleon stamps continued to be used until the fall of the Second Empire in the year 1870.

Following the Second Empire, the Ceres series were reintroduced in 1870 at the start of the Third Republic. The Ceres stamps continued to be used until the year 1876. Most of the valuable and rare French stamps mentioned in this blogpost were issued during these three periods in France’s early postal history.