The Top 10 Most Rare US Stamps

Philatelists are drawn to collecting rare US stamps for a number of reasons. Perhaps it’s the thrill of finally locating the stamp they’ve wanted for some time. It could also be that rare US stamps are a piece of history. For history buffs, collecting stamps is a fun and rewarding hobby to invest time, money, and effort into. Some of the United States’ most rare stamps include unique issues of World War I, Benjamin Franklin, or transportation by train at the turn of the 20th century. Other stamps were printed in error, with the imagery being inverted – the unintended mistake significantly adds to their value. If you ever happen upon a rare, inverted stamp, it may be that you’ve found a very valuable stamp!

Stamp enthusiasts may also enjoy collecting rare stamps from the United States because they are works of art from many decades or even centuries past. Some of the art portrayed on antique postage stamps are beautiful and usually depict an important person or time in history that collectors enjoy showcasing in their stamp collection. Of course, another leading factor is that rare US stamps are hard to come by and are therefore worth a lot of money. In this blog post, we’ll cover the top 10 most sought-after rare stamps issued in the United States. 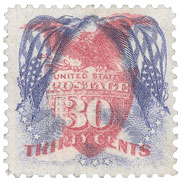 This Shield, Eagle & Flags issue is from the first stamp series to not feature portraits of prominent historical leaders. It was also the first stamp to use bicolor printing, however, it was infamous for its poor design and printing.

Another stamp issue to feature George Washington, this vertical pair is considered one of the most important rarities of the United States’ philatelic history. This unique issue from 1908 is extremely rare and features a rich red coloration on clean white paper.

To find an issue of the 1908 George Washington coil pair in perfect condition with the original gum is exceptionally hard to come by. In fact, stamp experts believe that only five of these still exist in pristine condition.

One of the known existing examples of this pair is currently kept in the Miller collection at the New York Public Library. Being as rare as it is, in 2019, a pair of this George Washington 1908 issue was sold for a staggering price of $700,000. 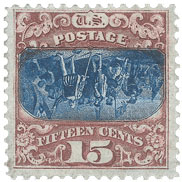 This famous painting by John Vanderlyn depicted the historic landing of Christopher Columbus, and it was issued on a 1869 stamp with an inverted center.

Printed in a distinctive blue and brown, this stamp, in excellent condition, was auctioned in 2013 for a whopping price of $800,000.

During the Civil War period, a number of Revolutionary War-era depictions were issued. These included the rare portrait of Benjamin Franklin, easily one of the most significant and recognized political figures in America’s history. Though many Benjamin Franklin stamps have been issued throughout the history of the United States, this is among the most rare and valuable. 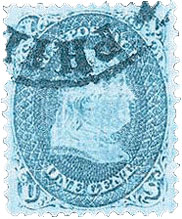 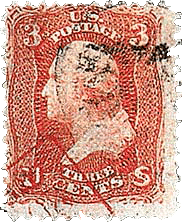 George Washington’s portrait was printed on many issues during the 1860’s to commemorate the legacy of our nation’s first president, however, the one we’re pointing out is the 3c issue. This rare 1867 George Washington stamp, printed in rose, was sold for $900,000 in 2008.

If you’re hoping to add hard-to-find, George Washington stamps to your collection, trying to find this one in pristine condition will be a challenge.

The distinctive green coloration of this stamp and the portrait of our first president makes this a dynamic issue and one of the most significant rare US stamps in our nation’s history. 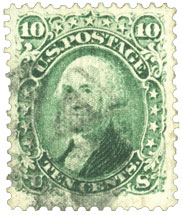 One of the most desired stamps in philately is the Alexandria “Blue Boy” rare stamp. Stamp experts suggest that only seven of these rare US stamps have been preserved. Today, the “Blue Boy” stamps are all a brownish-yellow coloration – save one that is still a bright blue color.

One of our nation’s most significant moments is the historic Declaration of Independence. This postage stamp, issued in 1869, commemorated our nation’s independence from Great Britain. However, some issues that were printed that year were mistakenly printed with an inverted center.

The issues were printed in either green (pictured here) or in violet. A pristine, unused example with the inverted error sold for approximately $1,200,000. 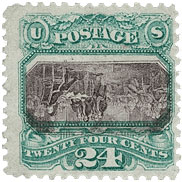 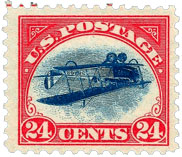 The stamp features a Curtiss JN-4 “Jenny” plane that was mistakenly printed upside down. Although most of the stamps with the printed error were destroyed, it is thought that 100 copies of this famous stamp still remain. 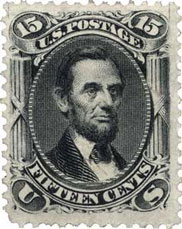 Here at Mesa Stamps, we are committed to quality in our customer service. All our postage stamps are listed in mint, never-hinged condition unless otherwise stated. Every now and then, our experts run across rare or more valuable stamps that we list here on our website. Some of these stamps were issued in the United States, Germany, Italy, Great Britain, Canada, and other countries around the globe. Learn more about the most valuable stamps around the world.

Having been in business for over 40 years, we ourselves enjoy the stamp collecting hobby and want to help stamp enthusiasts young and old find the stamp(s) they’re looking for to add to their collection. If you have questions, please reach out to us, and we’ll be happy to help you locate the perfect antique stamp.